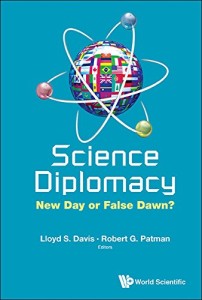 Robert Patman, Professor of International Relations at the Department of Politics at the University of Otago, New Zealand, was a speaker at the Science and Diplomacy Symposium on 27 August.

Along with Professor Lloyd Davis, he has co-edited a new book called ‘Science Diplomacy: New Day or False Dawn?’ (Singapore: World Scientific Publishing, 2014). The following piece by the authors originally appeared in the Otago Daily Times in New Zealand: is science diplomacy the answer to a world under threat?

Since the end of the Cold War, deepening globalisation has generated the possibility that science diplomacy may help states solve common challenges - in the areas of food, water, energy, climate, and health - that do not respect territorial boundaries.

Science diplomacy refers to the way in which states make use of scientific knowledge to diplomatically represent themselves and their interests in the international arena.

To be sure, science has been linked, in one way or another, to diplomacy for centuries.

However, the involvement of science in diplomacy has markedly increased in recent decades with revolutionary changes in information and communication technologies, which have made the world a smaller, more interconnected place and challenged the autonomy of the sovereign state.

Today, many of the major problems facing sovereign states are of global proportions and almost every one of them is linked, in some way, to science and technology. Virtually none of these challenges can be resolved by a state acting alone. But there is a paradox here.

While the number and severity of problems requiring international scientific solutions is rapidly increasing, many sovereign states, particularly the most powerful ones, remain in denial about this and so the international means for addressing these challenges remain weak and incomplete.

That there is a need for science diplomacy in today’s world is undeniable, but there are mixed signals on whether states are really prepared to develop its potential.

On the one hand, science diplomacy has been used to successfully initiate and manage large-scale international science projects.

Examples include the International Space Station, the Large Hadron Collider, research in the Antarctic, and the Square Kilometre Array project.

Diplomacy can not only facilitate scientific collaboration on such a scale that it could not be enacted without the involvement and agreement of states, but also both the process of collaborating and the scientific outcomes achieved may promote improved inter-state relations and greater international co-operation.

On the other hand, science diplomacy has failed to address what is regarded by many as the most significant threat to the future of the world, namely, global warming.

Climate change is, in many ways, the poster child for issues that transcend the boundaries of states and can only be tackled meaningfully by an international effort.

In 1988, the Intergovernmental Panel on Climate Change (IPCC), an international group of more than 2000 scientists, was established to review the available evidence in the field and their findings and warnings helped spur climate diplomacy over the next two decades.

In the end, relatively little has been achieved. The targets set by the countries through this diplomatic process have fallen woefully short of what scientists said was needed to ameliorate the problem of global warming.

Science, truth and evidence were not enough to trump the traditional drivers of international relations: the doctrine of unfettered state sovereignty and the corresponding belief that there is no authority than the state for defining national interests.

How, then, can the promise of science be more effectively harnessed by diplomacy in an increasingly interdependent world? At least three things need to happen.

First, scientists could - and should - insert themselves more frequently into the diplomatic process and national debates that directly influence governments. Scientists are widely respected in many societies, and they should not flinch from sharing their expertise on issues such as climate change with both officials and the broader public alike.

Second, it is high time the United Nations - the chief custodian of the international interest - was reformed to ensure the organisation could be a more effective forum for bringing diplomacy and science together to address global problems that can only be solved on a multilateral basis.

The composition of the permanent membership of the Security Council does not reflect the global realities of the 21st century, and the partisan use of the veto by the five permanent members effectively ensures that some of the world’s most pressing problems are ignored or inadequately addressed.

Third, states must come to terms with a fundamentally new global environment, which allows instant communications and financial transactions across borders.

States can no longer compartmentalise their national interests from other states as they did in the past, and ultimately must now learn that in an interconnected world some issues are so global in their reach and consequences that the costs of failing to recognise such common interests can be prohibitive both for their own citizens and those of other states.

It is not clear whether science diplomacy will fulfil its promise, but given the fast declining condition of the planet, it is imperative that it does.