Science advice to governments comes of age at Auckland conference 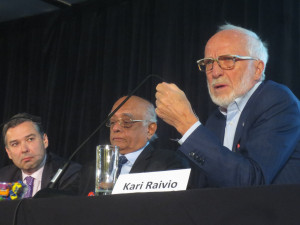 Auckland, New Zealand (29 August) — Science advice to governments has emerged as a discipline in its own right, which is both art and science. This is what delegates to the world’s first summit of science advice heard at a meeting in Auckland, which closed today with a strong call to strengthen international collaboration, an agreement to formalise the network and meet again in 2016.

Convened by the International Council for Science (ICSU) and hosted by New Zealand’s Chief Science Advisor, Sir Peter Gluckman, this historic summit marks a turning point in the global awareness that robust and credible science has an important place in public policy making. The conference brought together some 200 participants including science advisors, senior officials, representatives of national academies, experts and scholars from more than 40 countries across Africa, the Asia-Pacific region, Europe, the United States, Canada and Latin America.

“Our goal was to start a global conversation on the practices and challenges of conveying science advice to governments,” said Sir Peter Gluckman. “As brokers of knowledge, science advice practitioners aim to communicate what is known and what is not known in such a way as to assist decision makers in balancing evidence, social values and other imperatives in the policy process. This is no small task, particularly in contentious areas of policy, where public concern is high and the science is inevitably uncertain.”

”The meeting has highlighted a real thirst among practitioners to share models and lessons. I think we have experienced an unprecedented moment of awareness which we should seize and harness for action globally,” said Sir Peter.

The role of science advisor can at times be controversial. Science Advisor to EU President Jose-Manuel Barroso, Anne Glover gave a candid account of some of the challenges she has faced. “There is no point having a Chief Science Advisor and not taking advantage of them,” she said.

“The diversity of cultural approaches to science advice cannot be underestimated, and one size does not fit all. Without networks which connect practitioners of science advice, we are missing something,” she added, referring to the opportunities presented by conference.

“Many governments around the world have recognised the need to inform their policy decisions with the best knowledge available,” said Steven Wilson, Executive Director of the International Council for Science (ICSU). “I am thrilled that the practitioners working at this critical interface are strengthening their ties to build the practice and learn from each other.”

Another focus of discussion was the experience of early career scientists who are often at the leading edge of new scientific thinking. Jacqueline McGlade, Chief Scientist at UNEP, said one of the roles of science advisors was to protect and nurture these new perspectives in order to ensure continual progress in the provision of science advice.

Speaking at the summit, Romain Murenzi, the executive director of The World Academy of Science (TWAS), which represents the academies of the developing world, underlined the importance of strengthening collaboration among science advisory structures worldwide. “We need to get to a place where the science culture is pervasive and where we can truly say there is scientifically literate society. The role of science advice to government plays a big role in this,” he said.

The two-day summit was designed to promote open discussion on the provision of science advice in some of the most challenging policy contexts: situations of crisis; when evidence is in conflict with political views; and when evidence must cross geopolitical borders and cultures. Key themes that emerged from the delegates’ discussions included the importance of recognising the broad social context in which science is undertaken and applied; the value of involving policy makers and public alike in shaping the questions that science can begin to answer; and a commitment to greater collaboration amongst practitioners of advice to advance principles and accountabilities in brokering knowledge that can both honour and transcend our diversity.

The summit ended with a strong call to build upon the energy and enthusiasm generated within this growing network of practitioners. Sir Peter will chair the development of a more formal network supported by an expanded organising committee. Multinational organisations ICSU and the OECD Global Science Forum are working with organisers to take the initiative forward. Workshops on specific issues will be held over the next two years and a 2ndGlobal Conference on Science Advice to Governments will be held in Europe in 2016.

Full details of the meeting proceedings are available at www.globalscienceadvice.org

For media inquiries about the meeting and interview requests: